“Nothing will benefit human health and increase chances for survival on earth as much as the evolution to a vegetarian diet.” -Albert Einstein The popularized idea to consume massive amounts of meat isn’t just detrimental to us, humans, but also animals, and our environment. If we stop the immense amounts of animal products it can help us out. If a person changes their diet, they can wipe out factory farms which are killing them and our earth slowly.

Another compelling definition from dosomething.org,  “Animals are fed corn, wheat and soy that are grown through intensive industrial farms that use large amounts of pesticides, which can remain in their bodies and are passed on to the people who eat them, creating serious health hazards in humans.” this is skewed towards dismantling factory farms, and lists just a few of the inhumane conditions the animals face.

Factory farming is a topic overlooked and not addressed in most outlets people read. It’s important to acknowledge the effects factory farming has on the community and animals, and to talk about alternatives methods to factory farms and the laws that protect the animals. The mass production of livestock is responsible for factory farms in which creates the cruel and unusual treatment of animals.

Additionally, Factory farming has multiple environmental issues. One of the most prominent issues being pollution. Factory farms are known to produce massive amounts of manure which contributes to our pollution issue. 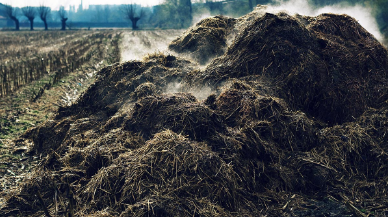 This is troubling in multiple aspects. Manure causes multiple problems like respiratory illnesses, skin infections, nausea, depression, and even death for people living in the surrounding area. In addition, the gallons of manure can spill into waterways from poorly structured lagoons. To put this in perspective, roughly 35,000 miles of river is contaminated by manure, or from fields of soil in which manure is over-applied. The manure contains hazardous ingredients that the livestock digested and will contaminate water in the surrounding communities.

Once again, the factory farms affects another group of people, people living in rural communities, due to it’s massive production of manure. This in itself creates problems. Settling in rural areas due to its large land mass, it becomes a burden to the community. For instance, the Factory Farm Sanctuary writes, “ …living near a factory farm compromises residents’ overall quality of life. Residents in towns near these farms are often forced to keep their windows closed and remain indoors due to foul odors” Being in proximity to a factory farm forces the community to make lifestyle changes. “… if you haven’t been in a hen plant, you don’t know what hell is,” says an activist. “chicken shit is piled six feet high, and your lungs burn like you took a torch to ’em.” Furthermore a study produced by Socially Responsible Agricultural Project reiterates how the conditions are getting so bad to the point where kids can’t even play outside, and on top of that, people are reporting pest infestations, rodents and flies from neighboring factories. These problems that arose are coming from factory farms that were not welcomed nor asked by the community, and now the surrounding communities are the ones facing the consequences of something that had nothing to do with them.

Another issue we often overlook is the treatment and conditions of animals in factory farms.  The Rolling Stones article, “In the Belly of the Beast” exposes the truth behind Factory Farms and paints a picture of what life is like for animals. The article states, “[The] Average space per bird in the wire battery cage that 95 percent of egg-laying hens in factory farms call home: 67 square inches. Dimensions of a standard-size sheet of letter paper: 93.5 square inches”

The animals produced by factory farms are treated inhumanely, forced in confined spaces, treated with antibiotics just to stay borderline healthy, starved to the point where they eat their own. 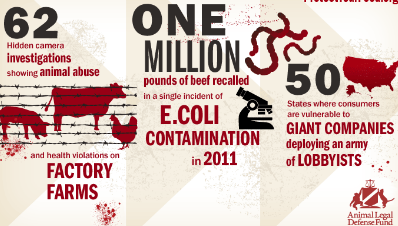 They live in piles of manure, not being able to turn their body in a 360 degree motion, no windows no human contact unless getting killed, this is what animals go through on a  factory farm. The scenarios differ from animal to animal For instance, chickens have two uses in most factory farms. They are used for their eggs and then killed for humans to eat. However, the chickens that are used to lay eggs are the most abused animal in factory farms due to high demand. According to Farm Sanctuary,   “280 million hens laid 77.3 billion eggs in 2007.” this further illustrates the auxiliary need for chickens. Chickens are forced into less than a square foot of space, tightly packed with six to seven other chickens while inhaling the fumes of manure of chickens being stacked above and below them.  The chickens usually walk over each other which lead to scratches and sores and create a bed for viruses and infections. Chickens are raised to unhealthy weights to create visually appealing, “market weight” chickens. In the article “Chickens used for Meat”, it states, “A 2006 study found that 55% of uncooked chicken purchased from supermarkets contained arsenic, which is known to cause cancer in humans. Arsenic is added to the feed of approximately 70% of the broilers raised each year” because it is believed to promote growth.” This further proves how detrimental overfeeding and adding antibiotics to animals is. It also shows how these inhumane conditions cause humans to develop health issues and become ill.

Another animal that is tortured are Pigs: intelligent animals intrigued by the world, they are forced into the most severe confinement which causes them stress and suffering. Even though they’re a drastically different size in comparison to chickens, they’re caged similarly. This makes it impossible for them to get up and move around, which results in poor joints, muscles and skeletal systems. There are many problems created due to the size of crates. For Example, in the article “Pork Production On Factory Farms” they say “The intense boredom and frustration pigs suffer in gestation crates have been blamed by researchers for abnormal, neurotic behaviors confined pigs sometimes exhibit, like repetitively biting at the bars of the gestation crate or chewing with an empty mouth. These behaviors can lead to additional suffering by causing sores and mouth damage.”

This quote illustrates the dehumanizing effects of the crates and how they aren’t suited for anyone.

Many people overlook the tortuous acts of factory farms. There are barely any laws that protect the rights of animals. One of the few laws that protect these animals is the Animal Welfare Act. “The Animal Welfare Act was signed into law in 1966. It is the only Federal law in the United States that regulates the treatment of animals in research, exhibition, transport, and by dealers.” this law protects the treatment of animals while being used in production. However, a loop that protects chickens from painful deaths if done in a warehouse. In most cases the chickens are put in an electric bath which rarely kill them, therefore they’re chopped and hanged alive while being processed away.

Since 1980, the Animal Legal Defense Fund has been keeping their members and supporters posted on our groundbreaking legal work for animals. They are known for their relentless work on creating effective cruelty-free laws that are in effect but aren’t working. However, an act that has been passed to protect the well-being of factory farmed animals, “the United States Department of Agriculture, is the only Federal law in the United States that regulates the treatment of animals in research, exhibition, transport, and by dealers.” this law protects the safety of any animal in different conditions.

Another act that has been passed to protect animals prosperity is The Humane Methods of Livestock Slaughter Act, “Originally passed in 1958, the law that is enforced today by the USDA Food Safety and Inspection Service (FSIS) was passed as the Humane Slaughter Act of 1978. This Act requires the proper treatment and humane handling of all food animals slaughtered in USDA inspected slaughter plants. It does not apply to chickens or other birds.” this was created to ensure a lessened painful killing of animals.

Nevertheless there are still loopholes big corporations identify. The Animal Legal Defense Fund, exposes the truth behind the Humane Methods of Livestock Act, and how there are deficiencies in the act which makes it easier for big companies to still kill animals at rapid, and easier methods, the Humane Methods of Livestock Act, states, “The Act requires that animals be stunned into unconsciousness and rendered insensible to pain prior to slaughter. The Act has been wrongly interpreted to exclude birds, who make up more than 90 percent of the animals slaughtered for food, as well as rabbits, fish, and other animals routinely raised for human consumption. The law also permits ritual slaughter in which the animal is not rendered unconscious before slaughter.” This law is poorly enforced, which makes the killing of animals not a main priority.

On the other side of the debate, there are so many alternative methods to factory farming, including free range, which lets animals roam freely outdoors, rather than being confined in an enclosure for 24 hours a day. Another are grass-based farms in which animals are able to  forage and graze for their own fresh food. A well known alternative is organic meat, it does everything that factory farming doesn’t. For example, the animals cannot be over-crowded or kept in unsanitary conditions, fed a lot for any extended period of time, or cannot be directly or indirectly exposed to artificial pesticides. Discovering alternatives to factory farming as I aforementioned, gives reasoning to destroy factory farming and switch to alternative methods which result in combatting environmental issues and keep animals out of harm’s way.

The main contributor to mass productions of these animals are the big corporations involved.  For example, Tyson Company is the largest poultry producer in the nation. A group  that has been exposing the truth behind big corporations and their involvement in factory farms, is Mercy for Animals  For instance, they state “(Tyson) has horrific cruelty to animals, including birds bred to grow so fast they become crippled under their own weight, workers violently punching, beating, and stabbing animals, and birds having their heads ripped off while they are still alive and conscious.”  Tyson company isn’t the only company that is contributing to this problem, there is also Cargill, Smithfield, and Perdue that contribute to the mass production of factory farms. In conjunction, these big corporations are encouraging the brutal killings of innocent animals, and pollution that is currently hurting our communities but later will have an impact on our earth, this needs to stop.

Factory farming is a system of rearing livestock using intensive methods, by which poultry, pigs, or cattle are confined indoors under strictly controlled conditions. The mass production of livestock is responsible for factory farms in which create the cruel and unusual treatment of animals. Now being aware of the circumstances, animal cruelty, the loopholes folded into the laws,  and the big corporations involved, we need to dismantle factory farming and switch to the alternative farming methods that are better suited for the us, humans, animals and environment.