Nabi hadn’t seen the Americans in a while. (1)He did not miss the soldiers searching his house and pointing their guns at him and his family. They frightened him and made his little sister Sahar cry. The lack of American soldiers did not make his life easier, however. As the Americans left, the fighters from the mountain became bolder. Nabi also noticed he was wakened a more often by the loud explosions of missiles in the night. (2)He knew they too were the Americans’, and more specifically Obama, their ruler’s, doing. He knew this because his big cousin Askar had told him one day as they drove by the smoldering ruins of a house near the center of town.(3)

He pointed to the men covered in sheets lying on street in front of the rubble.

“That is why we must fight the oppressors.”(5)

Nabi knew, but didn’t like, what Askar was talking about. He was talking about the fighters from the mountains. They were the ones who were fighting the Americans out of Afghanistan in the name of God. They were also the ones who stole and enforced religious law in the name of God. Nabi liked the fighters’ oppression no better than the Americans’.

When his mother called for him to come into the house and close the door, Nabi thought nothing of it. It was only when he saw her nervous face that he knew something was wrong. From the upstairs window, Nabi and Sahar peered down onto the cobbles below. Down the street, an old red pickup truck inched forward as men with guns walked beside it. A large black flag with white script flew from the back of the truck and loud speakers announced the arrival of the “students”(6) of God. They warned against helping the infidel Americans and called for the support of their movement. The truck lurched to a stop a few houses down from Nabi’s home. He leaned his head out of the window just far enough to see the men walk up to the house where the truck had parked. One man stepped back and then kicked down the door. The fighters streamed in. Then Nabi heard the rattle of gunfire. He grabbed Sahar and ducked beneath the window. Soon, he heard the truck start up again and listened as the blaring loud speakers rolled by in front of his home. Nabi didn’t move until the noise disappeared into the distance.

Outside, a tattered man lay in the street(7).On his door was painted the word “Infidel.” Nabi felt sick.

Five weeks later, cousin Askar showed up to the house. At first, Nabi did not recognize him and ran scared to his mother. Askar was dressed in black and carried an automatic rifle. He stood in the front yard basking in the sun while Nabi and Sahar looked on from the doorway. He had come to say goodbye.

“Where are you going?” asked Nabi.

“To fight the men who have killed our brothers and destroyed our lands. To fight the Americans. I just want you all to be safe.”

“I want you to be safe. When will you be back?” cried Nabi.

Askar laughed. “Don’t worry, I will be back before you notice I am gone.”

Sergeant Brandswell knew exactly what he was looking at. He had been following the man for hours. From the thermal camera of his Reaper drone(8), he could clearly see the armed insurgent standing right outside of the two story building. Almost a dozen Marines lost their life in this heavily Taliban influenced district. High Command had requested the elimination of any and all hostile personnel in the region. 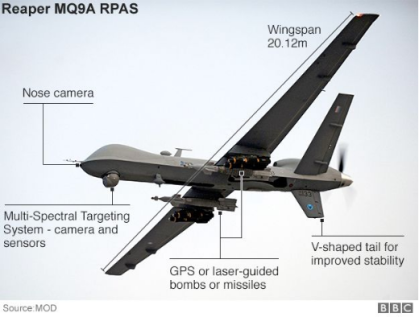 The AK-47 over the man’s shoulder sealed the deal. As Sergeant Brandswell waited for an order to engage, the Reaper glided through the skies.

As the Hellfire missile(10) rocketed towards the earth, he wondered if the man would even hear it coming. Then the missile struck. A burst of white flames on the thermal camera seemed to obliterate the man and the building he was standing in front of.

Askar, Nabi and Sahar died before they knew what was happening.(14)Flames engulfed the place the front of Nabis house had stood only moments before. Their family, like many families of war victims, didn’t even have bodies to mourn over.

(1) Obama began taking US ground troops out of Afghanistan in 2012. http://time.com/4394955/afghanistan-barack-obama-troops-pullout/

(3) An “ AGM-114N [Hellfire missile] variant uses a thermobaric warhead that can suck the air out of a cave, collapse a building, or produce an astoundingly large blast radius out in the open.” http://www.defenseindustrydaily.com/us-hellfire-missile-orders-fy-2011-2014-07019/

(5)According to Robert Grenier, the former head of CIA counterterrorism center, US drone strikes are “creating more enemies than [they are] removing from the battlefield”. http://www.aljazeera.com/programmes/upfront/2015/10/drone-strikes-create-terrorists-kill-151023152321140.html

(6)In Arabic “taliban” means “seeker of knowlege” or “student.” https://en.oxforddictionaries.com/definition/taliban

(7)The Taliban in Afganistan are belived to be responsible for 698 targeted killings in 2012. https://www.theguardian.com/news/datablog/2010/aug/10/afghanistan-civilian-casualties-statistics

(8) The MQ-9 Reaper is an armed, long-endourance drone used primarily to kill high-value, moving, and time sensitive targets. The Reaper can fly up to 15,240 m (50,000 miles) and uses four air to ground Hellfire missiles to kill its targets. Camaras on the drone integrate “an infrared sensor, color/monochrome daylight TV camera, image-intensified TV camera, laser range finder /designator, and laser illuminator” to view targets on the ground or in the air. http://www.af.mil/AboutUs/FactSheets/Display/tabid/224/Article/104470/mq-9-reaper.aspx

(9) Each Reaper drone “is controlled by its own two-airman team located at a ground control station.” http://science.howstuffworks.com/reaper4.htm

(10)Lazor guided AGM-114P Hellfire missiles are Americas perfered ariel anti-armour missiles for use on drones.It can travel up to 9 km (5.6 miles). http://www.defenseindustrydaily.com/us-hellfire-missile-orders-fy-2011-2014-07019/

(12)A Hellfire has a kill radious of 15 meters (50 feet) and a wounding radious of 25 meters (65 Feet). https://geographicalimaginations.com/tag/hellfire-missile/

(13)“From January 2015 through June 8 2015, the United States completed 11 confirmed, and possibly 23 extra drone strikes in Afghanistan, killing from a minimum of 99 to a possible maximum of 274 persons, of which 14 to 36 civilians, including a possible maximum of 15 children, and causing 1 to 10 injured (the bar chart shows the median values for both the minimum confirmed and the possible extra values).” http://stats.areppim.com/stats/stats_dronewar_afgh.htm

(14) According to the leaked US government document known as “The Drone Papers” during a five month period in Afghanistan, almost 90% of people killed by US drone strikes were civilian.http://www.aljazeera.com/programmes/upfront/2015/10/drone-strikes-create-terrorists-kill-151023152321140.html