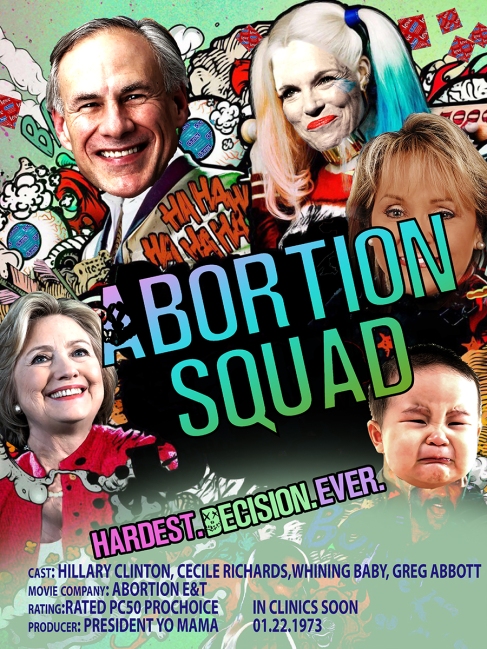 Our project is about how has the changing state laws and shifting social opinions about abortion have impacted a woman’s experience surrounding abortion.

We chose to satirize the movie poster for Suicide Squad because it was not as literal as the other films, such as Juno which centered around reproduction and pregnancy. We felt that Suicide Squad, the literal title was indirectly related to our topic because abortion has to do with murder in a sense.Also Suicide Squad was a well known movie that everyone either heard about or seen. The Suicide Squad poster in particular was also a good choice in our opinion because it had high contrast of color on the poster and fonts.

We changed the faces and the title to  “Abortion Squad”, because our topic is about abortion and we felt that it would be a cool twist to the original poster. We also created original credits, where much of the satire and meaning can be found. One of our favorite elements is “Harley Quinn’s” face.
We chose to include images of the Oklahoma and Texas governors, because they are all highly against abortion and also their states have laws that limit abortion. We included an image of the CEO of Planned Parenthood and Hillary Clinton because they overall support abortion. All these people are highly important to our topic on abortion.